As such, the protected property will foster nature-based outdoor recreation opportunities made available to the general public. The property has quite a history. 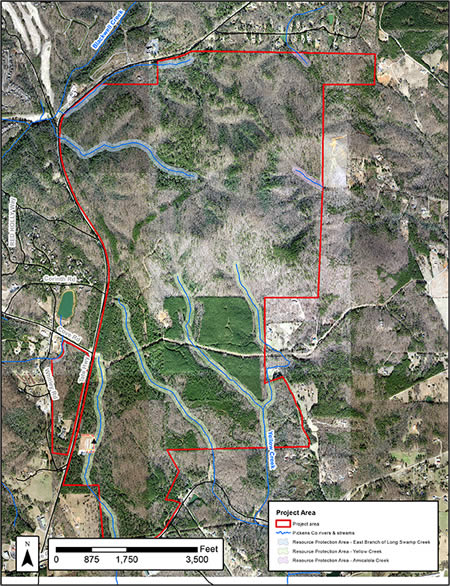 The Potts Mountain Farmer’s Market is located on the property where in 1836, Young Potts and his wife, Teresa Smith Potts, located their family. The area was called Wolfscratch, lands once known to be Cherokee Indian hunting grounds.

Augustus, the first Potts’ child, was born May 12, 1842, but joy turned to grief when the boy died the following year. Young Potts made a clearing in a copse of trees near the house and buried Augustus there. He declared that all of his family would thereafter be laid to rest in this little plot, and he later built a tiny chapel nearby.

This family cemetery is located adjacent to Georgia Highway 53 in the southern extremes of the property. Folklore and old stories hold that the property near the cemetery is haunted by the ghost of a slave killed by Young Potts. The story reads as follows:

In the 1850’s a trip to and from Atlanta took up to ten days via mule-drawn wagon. Travelers would camp alongside the road each night as accommodations were limited. On one trip back from the city, Young Potts awoke to find the slave standing nearby with an ax in his hand. The slave claimed he’d been awoken by a noise and taken up the ax for protection. Young Potts was sure the slave’s intentions were murderous. Upon returning home, Potts shot and killed the slave, burying him near what is today the corner of Georgia Highway 53 and Steve Tate Highway on the slope of Potts Mountain.

The facts remain as mysteriously shrouded as are the trees now choked with kudzu vines along the old roadway where the slave was allegedly buried, not too far from the Potts family graveyard. Over time many tales were told by settlers about a dark shape following them as they traveled between Dawsonville and Tate after sundown. The disturbed ghost of the murdered slave was believed to be the cause of many eerie sounds and happenings on the narrow rutted roadway and night travelers once urged their horses to a gallop when they approached the Potts Cemetery area.

The Old Federal Road transects the property for a linear distance of 4,699 feet.

In 1803, the Secretary of War succeeded in persuading the Cherokee Nation to grant permission for a wagon road “not to exceed sixty feet in width” to originate at two sites on Cherokee land, Tellico and Southwest Point (later Kingston), Tennessee, and to run through the Cherokee Nation to the Georgia town of Athens. Initially called the Georgia Road, the Federal Road became part of the historic “Trail of Tears”.

In the early 1830’s an estimated 4,000 Cherokee Indians died from hunger, exposure and disease following U.S. President Andrew Jackson’s Indian Removal Act – wherein Cherokee Indians were forcibly removed from their native homelands here and relocated to reservation lands in Oklahoma. Today their route is widely referred to as the “Trail of Tears”, listed on the National Historic Trails in 1987.

And a section of the property was historically utilized by a local farmer’s market, connecting residents and visitors with local farmers increasing access to fresh, affordable, local and healthy food choices.

Now held each Saturday from May – October, the Potts Mountain Farmers Market continues the tradition and history of this important property.